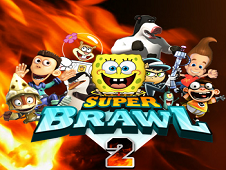 Super Brawl 2 is an interesting fighting game which you can play for free on gogy action games. The game contains a variety of favourite cartoon characters from Sponge Bob Square Pants and many more of your favourite Nick animation movies. You are allowed to choose the character you like and then enter the battle.

We prepare totally 32 awesome characters such as SpongeBob SquarePants, Danny Phantom, Rico from Madagascar, Dudley Puppy, Kitty Katswell and so on. They have different strengths so you should try out all of them to explore them in gogy kid games. 24 of them are always available for you to choose but 8 of them are locked that you have to pass many levels to be able to try them.

There are 4 modes with different features: Arcade, Tournament, Tag Team and Survival. In the Arcade mode, you customize your Brawl and pick the fighters and the stages. The Tournament mode helps you to advance your way. In Tag Team, you will join a team to compete the other team. And the last one, the Survival, you must defeat as many players as possible with just one bar of health.

You attack the opponents by kicking and punching them. Besides, remember to avoid their attacks. You can see 2 Health bars on the top of the screen. They show your and your foe’s health status. Whose bar runs out of first, this will be the loser. Attempt to become the strongest warrior in the game.

If you think this game attracts you, don’t forget to vote and leave your comments. Share it with your friends to take part in the battle together. Explore more funny games like Mutant Fighting Cup 2 and Prehistoric Sharkat http://www.gogy.games/.