1. If you have not done so, download Gibbed's Mass Effect 2 Save Editor
URL: http://www.mediafire.com/?ti2r3d2gx1y
2. locate and load the savegame you want to edit
Each Mass Effect 2 career have it's own unique directory. Under Windows XP you can find the directory root folder here:
./Documents and Settings/YourComputerID/My Documents/BioWare/Mass Effect 2/Save
3. Make modifications and save the changes, then click on the 3rd icon (top left) that looks like an ancient 3.5' floppy disk, a window will pop up. Now you can change folder, overwrite or simply give your modified savegame a new name. If you give your save a new name, follow the naming restrictions to be safe i.e. if you do not want to overwrite your (example) Save_0001.pcsav save, then just save it as Save_0002.pcsav - when making major changes, try to not overwrite your original save if you messed up without knowing it.
How to locate and modify general aspects in a savegame
1. 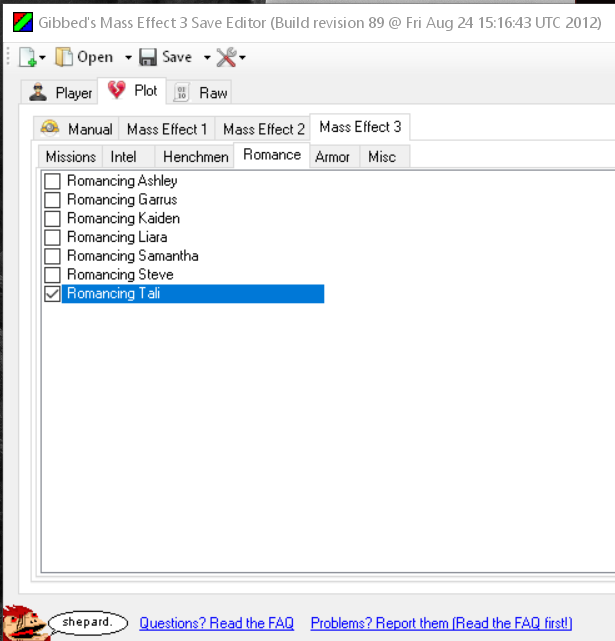 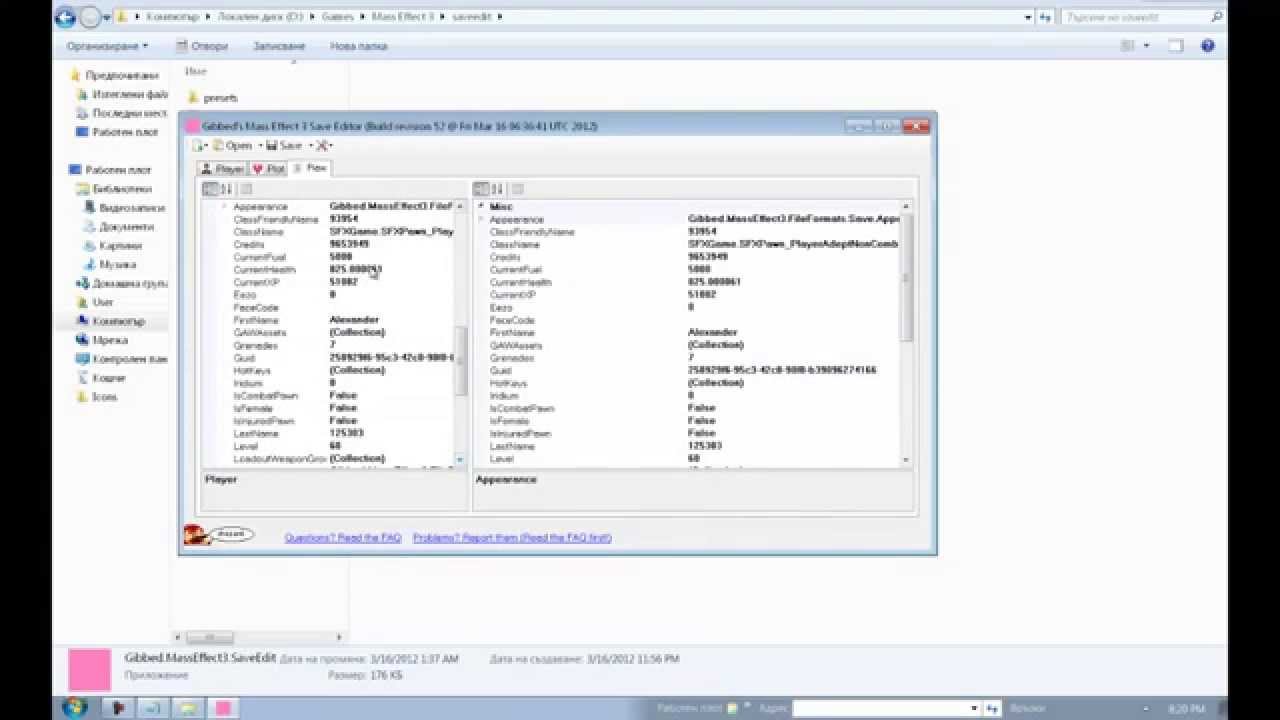 4. Save and load the game.
Interesting facts: You might encounter 'head' glitches' when changing gender! If you only changed your gender to just 'activate' a romance flag (I'll explain more about that later) don't worry about it. Activate the romance, save the game, then load the editor and gender change back.
Important facts: *IF* you receive a headglitch and plan to play 'a bit' longer or 'permanently' as a new gender, just fix the glitch with the instructions above on 'How to 'import' (i.e. replace) a face' and 'How to get the vanilla hero male/female poster face'. Remember that player generated faces are different for male/female so make sure to have some alternatives in the 'face' directory, or simply use the vanilla poster faces.
How to romance same gender crew members NOT intended by Electronic Arts/BioWare:
1. In Mass Effect 2 go to Options/Gameplay and turn on: Subtitles
The only 'same gender' romances which have full recorded voice (Jennifer Hale) is the Morinth and Kelly Chambers ones. All other 'non-intended' romances lack Mark Meer/Jennifer Hale voice-overs. In order to be able to 'experience' a non-intended romance (F/F or M/M) you MUST turn on 'Subtitles' in the game.
You can romance these characters as a female Shepard:
Tali'Zorah nar Rayya
Subject Zero
Miranda Lawson
You can romance these characters as a male Shepard:
Garrus Vakarian
Thane Krios
Jacob Taylor
Route 1 (the most easy one):
Play the game as a male or female and simply change your gender when you have an 'active and on-going' romance with a 'crew member' (don't forget to turn on Subtitles).

Route 2 (sorry for big textblock - it's just I dont want you to get a messed up in-game romance):
At certain 'key-points' in Mass Effect 2 you will be able to start (activate) a gender specific romance with predetermined crew members.
The main problem with these 'key-points' is the 'point of no return' flags they turn 'ON' in your 'actual gameplay' (editor does not support modification of these flags yet) *IF* you talk to a 'not intended' romance crew member as the 'wrong' gender. Let me explain it in a more easy to understandable way:
If you as a 'female' talk to Tali when the 'romance conditions' are met for a 'male' Shepard and select her 'specific' gender-check topic (i.e. click it) 'I want to talk to you' then you will NEVER be able to romance her as a female even if you 'gender change' to a 'male' and talk with her again. Oh, it's ONLY dangerous to click the 'I want to talk to you' *WHEN* you are at a romance 'key-point', and you'll defiantly know (hear from her) when that time is there.
The ONLY WAY to not 'mess up' is to *SAVE THE GAME* 'before' talking to a non-intended crew member you want to romance. But then again, its not 'dangerous' as long you do NOT click on the 'gender-check' trigger topic (when it's activated to gender-check you for a romance flag), so all 'general discussions' with crew members are safe. But to get back on track with more examples:
If you as a female talk to 'Jack' (male only romance option) and she say something like 'she´s not into the girls club' (strange considering her own earlier story regarding bi-sex) then your toon have been flagged permanently as the wrong gender with her, and thus you cannot 'genderchange' and romance her. However, since you SAVED the game BEFORE talking with her and activated the 'gender check' topic (I think it was: 'I want to know more about you') you'll just have to start up Gibbed's Mass Effect 2 Save Editor and load the savegame, then gender change you to a MALE, when done, save and load up the savegame in mass effect 2 and talk to 'Jack'. Now her 'response' will be different (i.e. you passed the gender check) and now you can activate the 'romance' if you want to.
Since I figured out all of this yesterday I have not done much testing, but I *think* the game only 'gender-check' your character once, so once you have a 'romance' going with a crew member it's 'safe' to return to your 'old gender'. My Tali romance have so far worked out just perfect with my female shepard.

Image 1: http://www.mediafire..znyy3mo&thumb=6
Image 2: http://www.mediafire..2dgmwiz&thumb=6
But as long you play it safe i.e. SAVE THE GAME before talking to a crew member your romance as not-inteded by Electronic Arts or BioWare, you can always correct/pass other 'gender checks' as explained above. But the last thing I want is to make all of this sound complicated, becouse its not!
Once again: - I think the game ONLY gendercheck you ONCE, and when you passed that check, you are SAFE all the way down to the climax with all non-inteded romances. I even want to go so far to say this: I think even Mass Effect 3 will be forced to recognize any F/F and M/M romances since it's actually only a 'flag-change'.
Okay.. I'll develop this guide more later, but now I need to get back to work.
Be safe all!
O.

See modding thread http://social.bioware.com/forum/1/topic/128/index/2277020/1 for xbox modding information and to ask questions. Also see Javier's link to his google docs near the end of the OP. Requires Microsoft .NET (tested with v3.5).

N.B. Screen capture video for mac. : Vaporizer has been active improving this editor. See his file descriptions for changes.

It also stores xbox headmorphs in pc format so headmorphs from either can be used. (It will still read the XanderChaos' BigEndian headmorphs, but XC's Gibbed will *not* read the default headmorph from this.)

The descriptions and suggested values for the new variables are taken from http://masseffect.wikia.com/wiki/PC_Tweaks_(Mass_Effect_2). Check the hex edit thread for more definitive info on what values are recommended or allowed.

This file was mirrored from http://social.bioware.com/project/4373/.